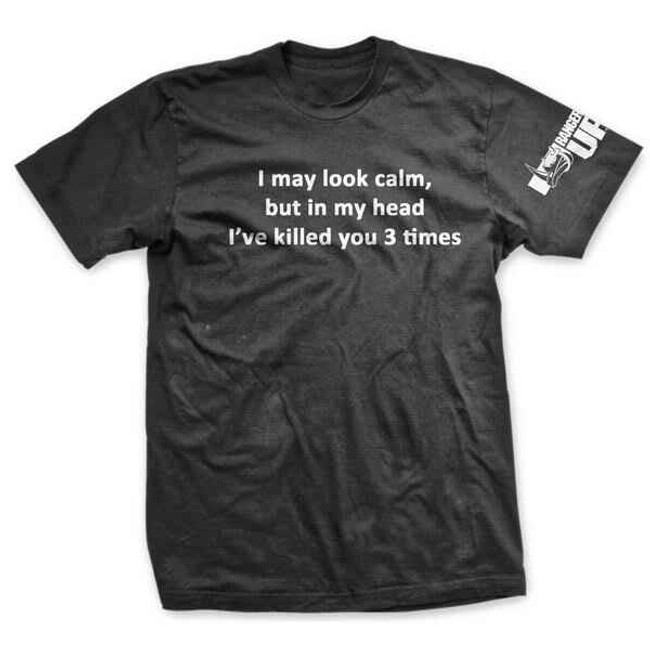 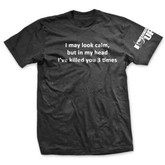 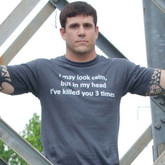 There are two descriptions we wrote for this shirt - a long one and a short one. I've decided to post both.

Hell is other people.

You're in a bar and you're staring at someone saying the most incredibly absurd and ignorant things imaginable. Your insides are turning inside out. You wonder how the fuck this person has lived on the same planet as you and arrived at these conclusions, and worse, how very sure they are of them or how they can believe their conduct is acceptable.

Maybe it's the jackass jawing you about the military with the "real truth" about the war even though they've never served. Maybe it's your friend's significant other and you are doing your best to tolerate their idiotic comments about politics/life/whatever. Maybe it's the kid in your political science class smugly explaining how the world really works.

And you stand there and you may debate them for a minute or two, but deep down you know there is nothing you can say, no evidence you can provide, that will make them understand that they are wrong. You know the only real power in the world is violence. You know it because you've lived it. Everything else laws, civilization, money, everything is a loosely held together bargain we've all struck. This clown doesn't see that threat because he doesn't see the real world.

You'd love to welcome him to this world, but you don't. You're far too disciplined for that. Hell, most of us have gotten so good at absorbing our emotions that they not only think we're okay with them, but that we kind of agree with them.

And while their mouth continues moving and the other people are engaging them in a bullshit conversation they all see as important, you just sit there and think:

"I may seem calm, but on the inside I've already killed you three times."

Life would be a whole lot better if some people would just shut the fuck up.