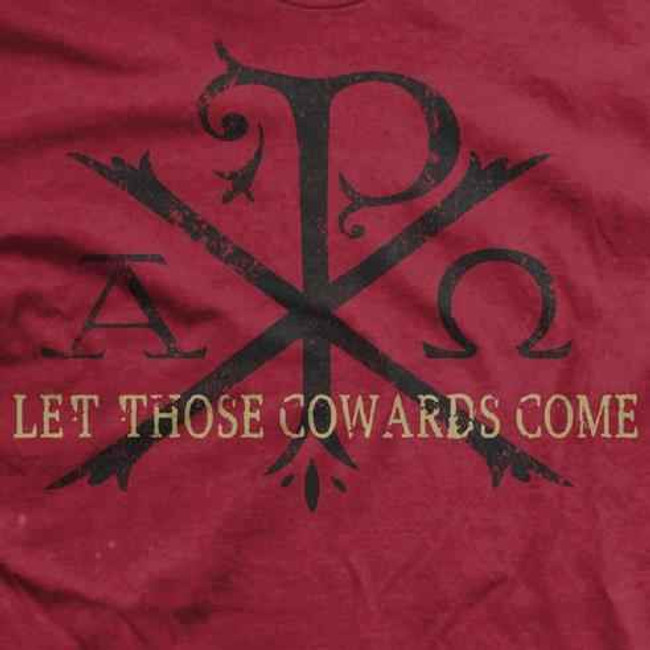 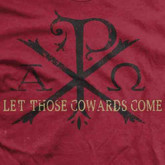 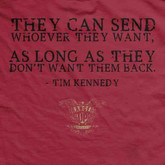 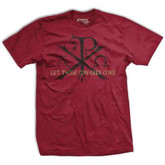 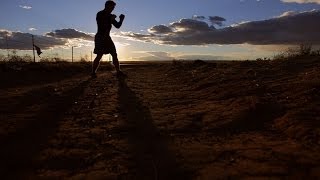 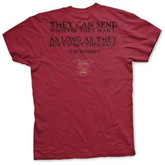 Item Code: RU970
Out of Stock
Unavailable
Email me when in stock
See More
The selected product combination is currently unavailable.
See More

When the FBI showed up to Tim Kennedy's house and informed him that ISIS put him on a hit list, Tim had one simple response: "Let those cowards come."

The Chi Rho is one of the earliest forms of Christogram, and is used by some Christians. It is formed by superimposing the first two (capital) letters chi and rho (??) of the Greek word "???????" = KRistos = Christ in such a way to produce the monogram. Although not technically a Christian cross, the Chi-Rho invokes the authority of Jesus, as well as symbolizing his status as the Christ.

Do not fear ISIS. Let those cowards come.

From Tim Kennedy himself:

"We have credible intel suggesting that ISIS wants to kill you, Mr. Kennedy." This is what the FBI told me last week. I don't think they were too thrilled when I responded:

They fail to realize that this is absolutely nothing new to me. This is part of my life. And I'm good with that.

When I started fighting years ago and they announced that I was an "Army Ranger" (I was Special Forces, but whatever), I was immediately faced with Facebook warriors from the Middle East claiming they intended to kill me. People all over that region were hopping on the various MMA forums claiming they wanted my head. Well, after over a decade of making trips to their land and giving them ample opportunity to make true on their threats, I am excited to pass a message to all who have made these gutless attempts at bullying:

Yup. Still walking, running, fighting, and kicking ass-waiting for one of these spineless Daesh to even make an effort at coming to find me in America.

That's because they are nothing but cowardly and impotent murderers who prey on the weak. They look for soft targets who don't know how to defend themselves. They seek out the most defenseless in order to make themselves appear stronger than they really are.

I'm not a soft target-and they hate that.

People in places like Paris, France or Cologne, Germany who have tried to show them tolerance have received no sanctuary from the hate and rage from these terrorists. All of Europe has attempted open-arms, hyper-politically-correct approaches in trying to assimilate their culture into their societies and the response has been murder and rape.

I stand for everything they despise and I think it kills their inner child. So to ISIS or ISIL or crappy worthless excuses for human beings whatever you call yourselves-check it out.

I am not now-nor will I ever be afraid of you. Your lily-livered threats are meaningless to me because you don't have something we Americans call "courage."

Courage means stepping up against strong people rather than just looking for ways to exploit easy targets.

Courage means protecting those who can't protect themselves instead of trampling on them.

Courage means standing for a principle.

You are none of these things. And because of that you will always fail.

While you and your kind exploit the vulnerable for your own personal gain, I'm here in Texas training hundreds of people to stand up to low-life garbage like you-to actually protect the weak instead of preying on them like a vulture.

I will not be intimidated by you because I train against people far tougher than you'll ever be, and I do it on a daily basis.

But if you do decide to send someone after me-if you actually make an attempt at pretending to be tough-then you can send whoever you want and however many of them you want. Just understand one very important thing.

Don't expect to get them back.

Peace be with you,