This month’s BAMF made it through two wars, saving lives and boosting soldiers’ morale even after surviving a concentration camp and being a prisoner of war (POW). Corporal Tibor (Ted) Rubin dreamed of becoming an American citizen and, when he did, it was one of the happiest days of his life. He was so grateful that he joined the U.S. Army to show his appreciation.

Family History and the Concentration Camps

Born on June 18, 1929, in Hungary, Tibor Rubin came from a military family. Ted’s father, Ferenz, a soldier in the Hungarian Army and World War I hero, was a POW in Russia for approximately six years. Ferenz was later moved to Auschwitz concentration camp and then Buchenwald, where he eventually died. Rubin’s uncle was a POW as well.

When Rubin was 13, the Nazis sent his family to Mauthausen concentration camp in Austria. The Nazis killed his 10-year-old sister Elonja, another unnamed sister, and mother Rosa in a gas chamber at the concentration camp. Ted’s brother, Mike Lesak, fought with both the Czechs and English during WWII. His brother Emery, also a survivor of a concentration camp, went on to own a liquor store and would later bring Ted on as a partner after he survived hell.

Ted was 15 when U.S. troops liberated him from Mauthausen, and he vowed he would journey to the U.S. and join the United State’s fight against the Germans. Rubin came to the U.S. in 1948 and tried to enlist with the Army, but he failed the English test. Finally, he passed the test in 1950 and began his decorated military career.

Rubin once said, “I always wanted to become a citizen of the United States and when I became a citizen, it was one of the happiest days of my life. I think about the United States and I am a lucky person to live here. When I came to America, it was the first time I was free. It was one of the reasons I joined the U.S. Army because I wanted to show my appreciation.” It was his captivity during WWII that helped him survive captivity in North Korea. 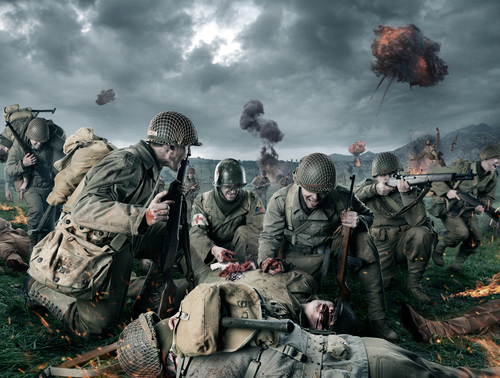 Rubin received the Medal of Honor for extraordinary valor for his actions during the period of July 25, 1920, to April 20, 1953. A rifleman with Company I, 8th Cavalry Regiment, 1st Cavalry Division in Korea, he stayed behind to keep the Taegu-Pusan Road open while his unit withdrew. This road was critical to the troops.

Corporal Rubin defended a hill alone against overwhelming numbers of North Korean soldiers, while inflicting an astonishing number of casualties over a 24-hour period. He single-handedly slowed the advance of the enemy army, allowing his whole unit to totally withdraw from the area. Afterward, the 8th Cavalry Regiment traveled north, advancing on North Korea. Rubin captured hundreds of enemy soldiers along the way.

October 20, 1950, Chinese military forces attacked his unit during the night at Unsan, North Korea. Throughout the night and following day, Rubin operated a .30 cal machine gun at the southern end of the regiment’s line after the first three gunners were killed. Eventually, he ran out of ammo, but he still managed to slow the enemy’s advance with what little weapon supplies he had left. This distraction allowed the rest of his unit to retreat south. The Chinese captured a badly injured Corporal Rubin.

They offered to send him home to Hungary, but he chose to stay at the prison camp where he became a tremendous asset to the other POWs. With a brazen disregard for his safety, Rubin started sneaking out of the encampment at night to raid gardens and storehouses looking for food for his fellow comrades. Ted provided urgently needed medical care for other POWs, as well as food and moral support.

The Government Awarded Rubin Medals 55 Years After His Brave Actions

Rubin’s self-sacrificing and courageous acts helped save the lives of about 40 other prisoners. He also received the Prisoner of War Medal and Congressional Medal of Honor 55 years later, for his uncommon bravery and fortitude. The medal was delayed because Corporal Rubin’s commander, First Sergeant Artice Watson, refused to put the paperwork through necessary for Ted to receive the Medal of Honor. Watson was known to be a malicious anti-Semite and always gave Rubin the most dangerous missions.

Other soldiers in the regiment witnessed the First Sergeant’s refusal and claimed that he did it because Rubin was Jewish. Corporal Harold Speakman wrote in an affidavit, “I believe in my heart that First Sgt. Watson would have jeopardized his own safety rather than assist in any way whatsoever in the awarding of the medal to a person of Jewish descent.”

It’s sad and ironic that Tibor Rubin survived the Holocaust and was so thankful for the U.S. help that he traveled to America to become a citizen with the sole goal of joining the military. Rubin donned life-saving military gear like every other military service member. Yet, anti-Semitism almost prevented him from getting the awards he so justly deserved. Corporal Tibor Rubin, we salute your valor and thank you for your extraordinary service in the U.S. military.