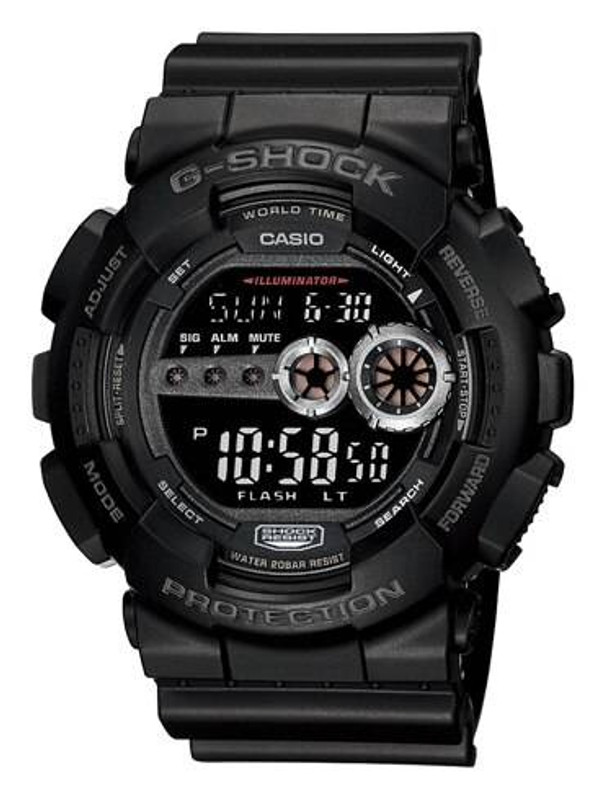 Item Code: GD100-1B
Out of Stock
Email me when in stock
See More

Detail
Reviews / Q&A
Detail
Casio developed the G-SHOCK brand of watches in 1983 to realize the new concept of a tough watch that would not break even if dropped. Since that time, the brand has continued to evolve, with advanced functions, construction and design all based on shock resistance. Casio has led the way in introducing electro luminescence (EL) and light emitting diode (LED) technologies for the luminous elements in watches, improving the visibility of the display in dark locations.

The new GD-100 uses a high brightness white LED as a backlight for the digital display, a feature which expresses the toughness that G-SHOCK represents, in the form of bright light.

In addition to EL lighting elements, LED lighting elements are commonly used as backlights for digital watches, but it has been difficult, on the low power available to a watch, to achieve high brightness with LEDs. They also face limitations when it comes to the color of the luminescence. Casio's newly developed luminescence circuit drives a high brightness white LED without using any more power than previous backlights. It provides approximately 6 times* the brightness of a conventional LED, and achieves outstanding visibility, even in a bright location. Moreover, the watches are highly practical, with a long battery life of approximately seven years.

*When comparing conventional LED brightness with the new high-brightness LED using the lighting power of the GD-100 watch.

The GD-100 boasts a comprehensive range of functions including a world time function showing the time in 48 cities around the world, five alarms, a stopwatch, and a countdown timer. There is also a flash alert function that blinks the backlight with the sound of the alarm or the time-up sound of the timer, and an auto-light function which automatically illuminates the display when the user tilts the watch toward the eyes to check the time.

The body of the watch has a round shape with large, easy-to-use buttons. The face design features five round LCD windows of different sizes all arranged in a row, which give the face a three-dimensional appearance when the high brightness LED lights up. The GD100-1B includes a model with a sharp looking white LCD readout on a dark background, or inverted LCD.


Casio GD100-1B G-SHOCK XL-Super LED Watch
WARNING: This product may contain chemicals known to the State of California to cause cancer and birth defects or other reproductive harm. For more information, go to www.P65Warnings.ca.gov.