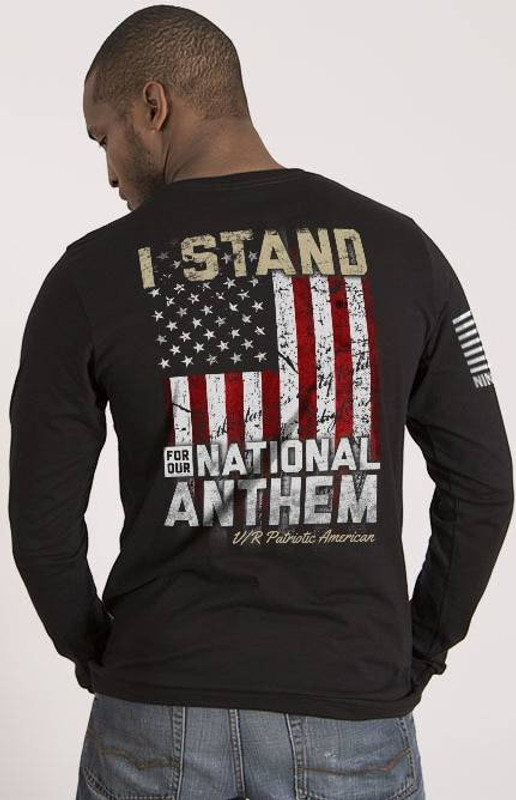 Item Code: STANDV2-LS
Out of Stock
Unavailable
Email me when in stock
See More
The selected product combination is currently unavailable.
See More

Why Do We Stand for the National Anthem?

With the recent trend of anti-patriotism on the rise, we at Nine Line Apparel hope to arm patriotic Americans with gear that not only makes a statement, but sends a message to those who disrespect our nation's glory and symbolism. We first took action when our great flag was being desecrated, stomped on by cowards who lost sight of the true meaning of Old Glory. Now, we are taking a stand for our national anthem.

Originally a poem written by Francis Scott Key during the war of 1812, the Star Spangled Banner was officially declared the National Anthem by Congress in 1931. Since then, it has been an icon of American resilience, perseverance, and exceptionalism. When our troops battle overseas for our freedoms, it is the Star Spangled Banner that rings in their ears and in their hearts. When our nation faces danger, turmoil, or strife, it is this song that unifies and strengthens our bond as citizens.

We at Nine Line do not stand for the national anthem because it is the cool thing to do, or because a professional athlete says we should. We stand for the anthem out of respect: respect for the struggles that our forefathers faced when establishing our young nation, respect for the countless lives of the brave men and women who were lost in pursuit of our liberty and independence. We stand in appreciation of the freedoms that we are fortunate enough, lucky enough, to enjoy every single day of our lives. We are the Land of the Free, and the Home of the Brave, and we stand for our National Anthem.


Nine Line I Stand Mens Long Sleeve Shirt
WARNING: This product may contain chemicals known to the State of California to cause cancer and birth defects or other reproductive harm. For more information, go to www.P65Warnings.ca.gov.