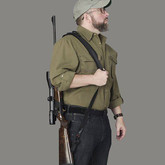 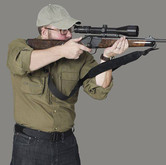 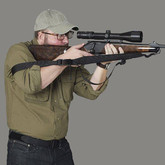 Item Code: MAN
Out of Stock
Unavailable
Email me when in stock
See More
The selected product combination is currently unavailable.
See More

Mann came to Galco in the Spring of 2015 with a novel idea for a hunting sling. His rough prototype allowed a hunter/rifleman to use the sling in three braced positions. The first position is the traditional hasty sling, as often used by the military and hunters. The second is the position originally used with Galco's Safari Ching sling, essentially a further simplified hasty sling, as preferred by many modern shooters. Lastly, Mann's original design allows the use of the more recent and modern military sniper technique, where the sling wraps around the strong triceps.


Galco Riflemann Sling
PayPal is not available as a payment option for this product.
WARNING: This product may contain chemicals known to the State of California to cause cancer and birth defects or other reproductive harm. For more information, go to www.P65Warnings.ca.gov.